I was born in September 1986 in Switzerland and grew up close to the capitol city Bern. Already in early years it became clear that I was not the typical girly girl. I was in love with computers, cars, sports, camping and loved to help my dad crafting around the house. Therefore it was not a great surprise when I started an apprenticeship as a computer specialist. After I finished with school and the apprenticeship I left for nearly a year to Australia and South East Asia to improve my English skills and get infected with the travel bug. If I would have known before how horrible this fever would be, I would have never left home. 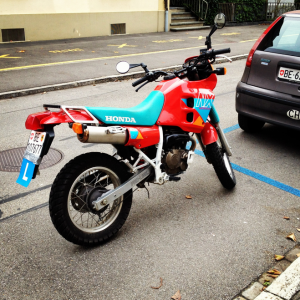 Back in Switzerland I went straight back to work and some more school. Of course I did some longer and shorter trips around Europe, North Africa and the States but it didn’t help much to calm my travel fever. After a while I had to leave again for a long trip, this time to Central and South America, where I also met Martin.
Honda NX 250

Already before this trip I was thinking about doing my motorbike license but because of different reasons I postponed it several times. While I was in South America I decided that right when I am back home, I really HAVE to do this. Even before Martin was back from his trip I already signed up for the motorbike course, bought some good gear and could borrow a cute Honda NX 250.

My first course day was quite a blast. It was December, raining cats and dogs and after the first try with a friend of mine I had to ride by myself to the meeting point of our course. Just before I arrived there, I was able to do my first wheelie, well of course by accident. Lucky me I could hold myself on the bike and made it in one piece to the meeting point.

A friend of mine and I had the plan to make a trip by motorbike to the black sea and back in summer 2013, of course with loads of gravel roads. Later Martin became a part of our team because he was not stoked about the fact that I would leave on a motorbike trip without him.

In spring 2013 I bought my first bike, my beloved XT 660R. With this bike I went to my driving test exactly one week before we left for our Balkans trip.

Luckily I mastered the test in the first round, otherwise it would have been imposible to leave for our trip. In Romania I had my first experience with gravel roads, of course with one of the most difficult roads I ever rode so far (even Martin had some troubles there). After some panic attacks – I didn’t allow myself to show my fear because I was the only girl in this team of three – I got totally hooked with riding in the dirt! Since this day, there is not much that I enjoy more than riding through rivers and over rocky, dirty gravel roads. Sadly there are not many legal possibilities to do so in Switzerland, therefore Martin and I travel as much as possible to other countries.

We may request cookies to be set on your device. We use cookies to let us know when you visit our websites, how you interact with us, to enrich your user experience, and to customize your relationship with our website.

Click on the different category headings to find out more. You can also change some of your preferences. Note that blocking some types of cookies may impact your experience on our websites and the services we are able to offer.

These cookies are strictly necessary to provide you with services available through our website and to use some of its features.

Because these cookies are strictly necessary to deliver the website, refuseing them will have impact how our site functions. You always can block or delete cookies by changing your browser settings and force blocking all cookies on this website. But this will always prompt you to accept/refuse cookies when revisiting our site.

We fully respect if you want to refuse cookies but to avoid asking you again and again kindly allow us to store a cookie for that. You are free to opt out any time or opt in for other cookies to get a better experience. If you refuse cookies we will remove all set cookies in our domain.

We provide you with a list of stored cookies on your computer in our domain so you can check what we stored. Due to security reasons we are not able to show or modify cookies from other domains. You can check these in your browser security settings.

These cookies collect information that is used either in aggregate form to help us understand how our website is being used or how effective our marketing campaigns are, or to help us customize our website and application for you in order to enhance your experience.

If you do not want that we track your visit to our site you can disable tracking in your browser here:

We also use different external services like Google Webfonts, Google Maps, and external Video providers. Since these providers may collect personal data like your IP address we allow you to block them here. Please be aware that this might heavily reduce the functionality and appearance of our site. Changes will take effect once you reload the page.

The following cookies are also needed - You can choose if you want to allow them: