In this chapter we would like to show you some of our solutions and why we chose them. ​ 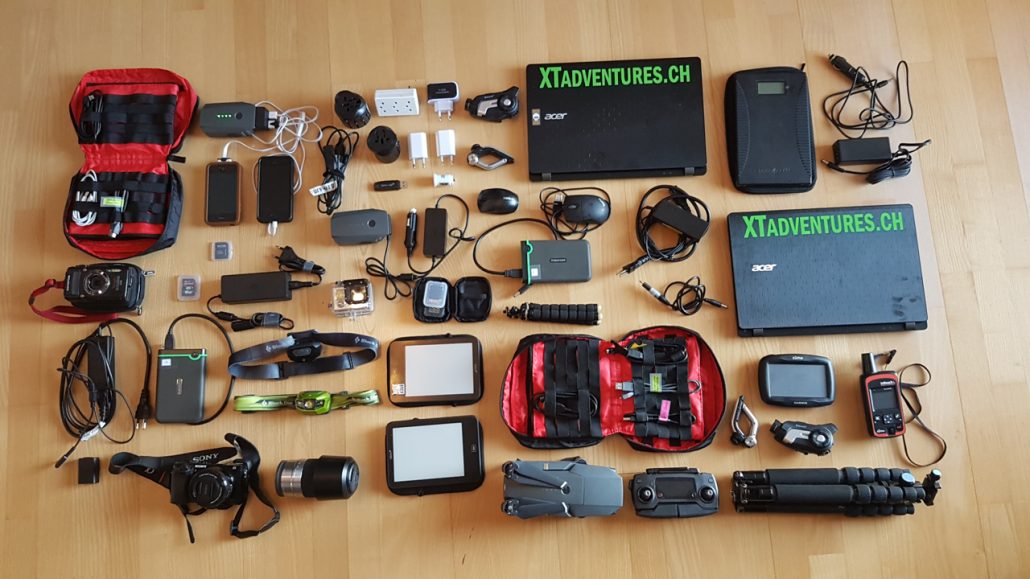 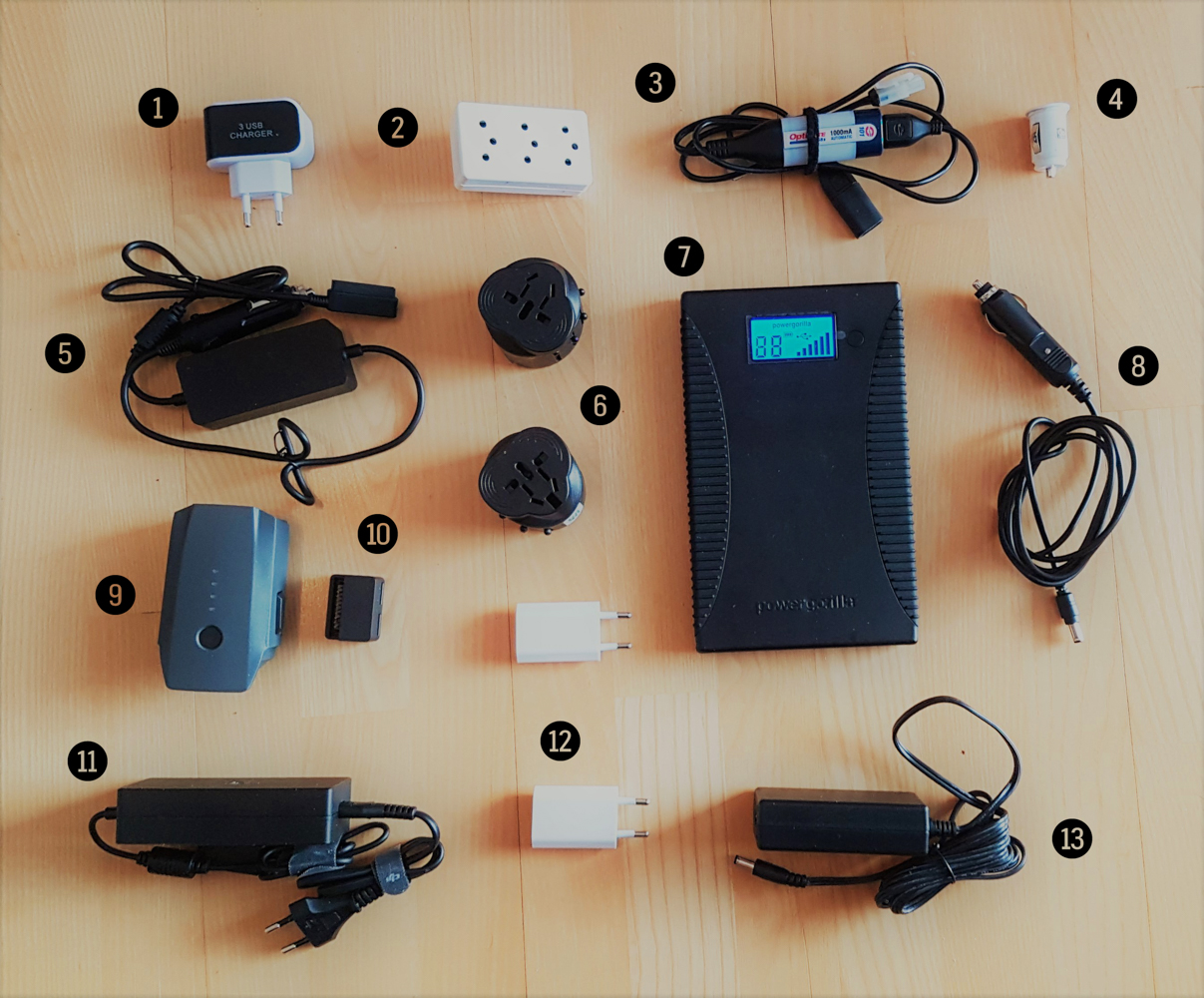 With all these gadgets you need a lot of power. If you travel by motorbike and plan to do a lot of camping, then this can be difficult because you need to figure out how to charge all this items. We already did some research and adjustments on our earlier trips and installed 12V DC sockets (on Xenia’s 660R with two USB sockets and on Martin’s bike a standard 12V socket) on our motorbikes.

On the 660Z Martin can also draw power directly from the battery via a USB cable. If we don’t sleep in the tent we can charge everything from a wall socket but even this requires some things.

With this set up we can charge all devices and powerbanks if we stay in a guesthouse in quite a short amount of time because we can charge seven devices at once (5 USB, 1 powerbank and one device via the powerbank). Provided that the fuse allows it in the guesthouse.

On the motorbikes we can charge up to five USB devices respectively three USB and one powerbank via 12V. Because we camp quite a lot its good that we can charge all our gear, even our laptops and Martins beard trimmer.

There is the possibility to charge the Powergorilla also with a solar charger, which is great if you are travelling by bicycle but because we have the motorbikes we don’t need this option.

Next to our drone and the SENA 10C Pro cameras, we have following camera equipment with us. 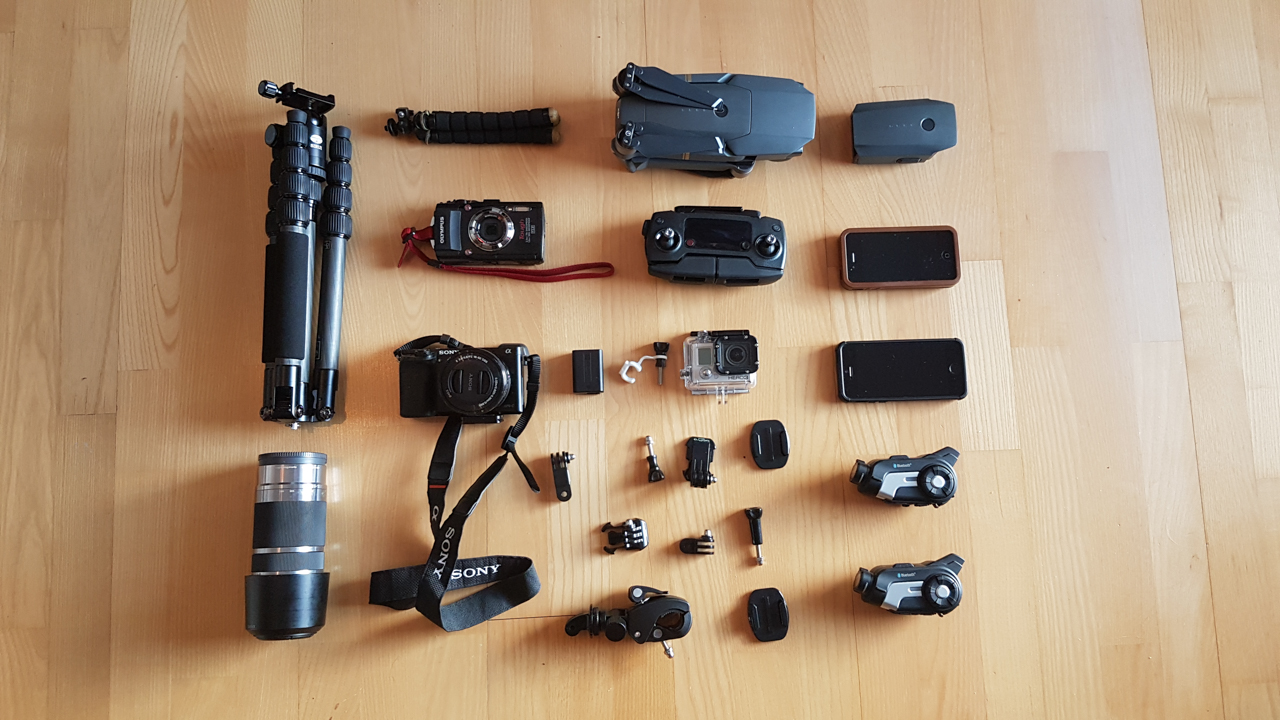 We decided that we both want to take a laptop and after beeing on the road for over 2 years, we are convinced this was the right decision.

Before we left we decided that we want a 13inch display and that it has to have enough power to work with all the Adobe and movie editing programs we work with. Also important was to have already quite a bit of hard disk space on the laptop itself and that this is an SSD to make sure it does not break while travelling. Therefore we went for the Acer Aspire V13 with 512GB SDD, 16GB Ram and an IntelCore i7-6500 CPU. So far we can say that the laptops are great and we did not have any issues with them.

We carry the laptops in our amazing Peli cases. More about them here.

External hard drives and back up solution

We started the trip with 2x 500GB Transcent Storejet hard drives, which hold up great. We have 3 of them and made sure that we could send one back and forth (either with parcels or friends) to Xenia’s parents.

After a while we had too much data therefore we bought another 2TB hard disk in Kyrgyzstan. In Australia we had to upgrade the 500GB ones to a new 4TB one by LaCie. Therefore we carry now a 4TB and a 2TB hard disk with us.

At Xenia’s parents place, we run an Apollo Server, which works like a cloud. Xenia’s dad uploads all the data there so we can access it anytime in case something happens to the hard drives. This way we have the data always stored in at least 2 different places. 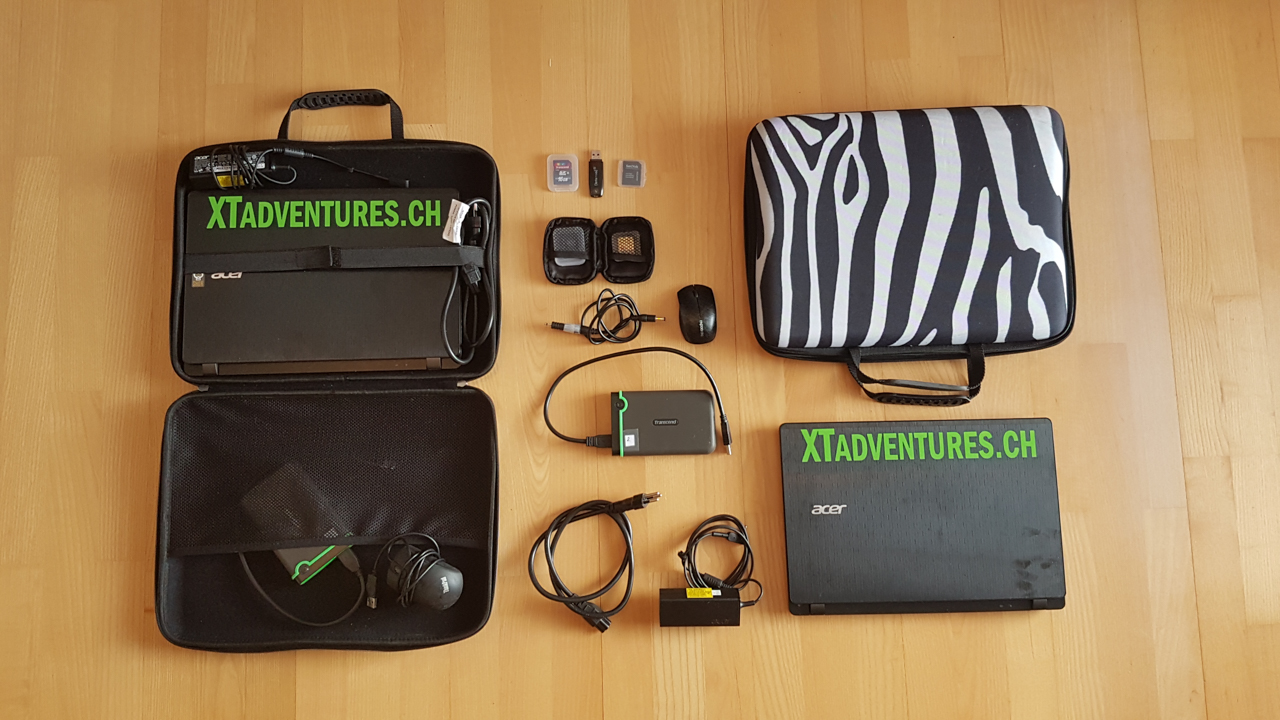 We used and liked the older 10C as it was the first helmet action camera to record video and our conversation at the same time. It is an action camera, photo camera, communication system and it enables us to listen to radio, the GPS, music or make a phone call while riding.

In short it makes our life travelling and recording very easy!

The new features of the 10C Pro is a WiFi connection to your smart phone and the new app “Sena Camera”. 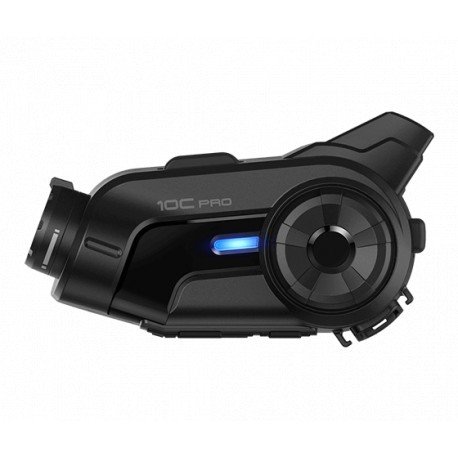 This makes the 10C Pro even easier to handle and more fun to use.

To handle the 10C Pro even safer we pair it with the RC4 Handlebar Remote control. With this remote we can hang on to the handlebar with both hands and still control the 10C Pro. This comes in very handy, specially in rough terrain.

All o these features make the 10C Pro our first choice action camera and communication system! 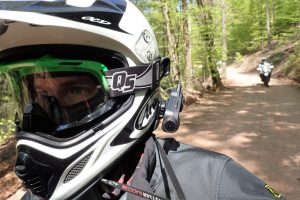 Since 2014 we only had positive experiences with the Sena SMH10. In February 2016 we visited Swissmoto again and went straight back to the booth of bikerheadset.ch to see what they news they had to offer. To our surprise the manager recognized us immediately probably because we had so many questions the last time when we visited them.

He introduced us to the latest Sena 10C product and patiently answered all our questions. We were very impressed with the progress of the communication system and even more with the integrated action cam. Thanks to the great support of Marco from bikerheadset.ch / e-performence.ch we were shortly afterwards proud owners of two new Sena 10C and two handlebar remote controls.

Since spring 2016 we are now riding with the Sena 10C and the handlebar remote controls and are more than happy with this set up!

Functions and facts of the 10C, which we love:

What makes the 10C better than the SMH 10 (our most important points):

Our input, specially for people who ride in a team: Buy a communication system and the SMH10 is a great choice, which we can recommend through our owen experience. Your nerves and vocal cords will be forever thankful! 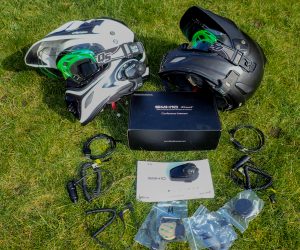 On our first trip together to the Black Sea and back we had some communication problems. Three riders, three different motorbikes and tank volumes, three different opinions about directions and when it would be time to have a break. After a month and 6000 kilometres with gesticulating and stressed nerves it became clear that we need a communication system.

At the Swiss Moto 2014 we tested the products of Scala Rider and SENA and decided that SENA has the perfect product for us: The SENA – SMH10 Bluetooth headset and intercom.

Here the reasons why we chose SENA over Scala: 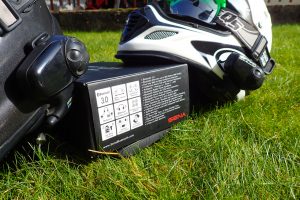 After two years and over 15’000km (Iceland, Morocco, smaller trips in Europe) we were still very happy with our SENAs.

The gadgetry have been often used in very harsh conditions (same as we). Dust, sand, mud, strong winds, torrential rain, snow, several crashes and temperatures between -5° and +38° degrees.
The strain was far above average but nothing could damage this two little gadgets. Until now we never had a single problem or a malfunction.

Function and facts about the SMH10 we like the most:

You want your own SENA? Check out our store!

We chose to take a drone with us because we really like the footage that drones produce. It is always a risk to take such an expensive gadget on a motorbike trip. Not only it can get stolen but the likelyhood of getting destroyed is also pretty high. As we did not have the right bag for the drone, we had quite some troubles with keeping it safe. Due to corrigation we destroyed 4! Mavic Pro drones (no crashes, just shaking). Therefore we strongly suggest to either pack it in your backpack while riding or put it in a case from Peli if you ride a lot of offroad.

First we decided to stop using a drone as it was just too expensive to buy a new one (the Mavic was covered by insurance and once we payed for the repair ourselfs). But after hearing many people say that they miss the drone footage, we made the step to go for another drone which we can easy pack in our backpack. Therefore we now travel with a Mavic Air. If you want to support us with the costs of buying this new drone, check out our Patreon page! 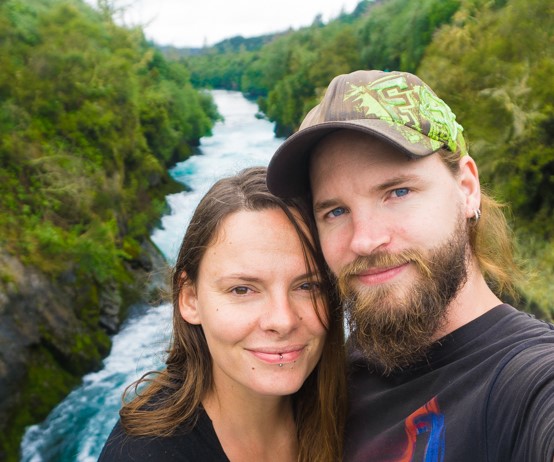 We are Xenia & Tinu and since February 2017 we are on a motorbike world trip with our two Yamaha XT660 bikes.

Don’t miss out on our latest adventures!

You like our content and would like to give something back? Check out our support page. Thanks so much already and keep the rubber side up.

Affiliate Disclosure: Some links on this website are affiliate links. This will bring no extra costs to you, but it will help us to go a little further. Thank you for supporting us!