I was born in summer 1984 close to the Swiss capitol Bern, in a village of 400 souls. I was still a little boy as my godfather took me on my first motorcycle ride. In the beginning I was afraid of the noise and speed of his red Ducati, but in the end the fascination for his heavy machine outweighed. 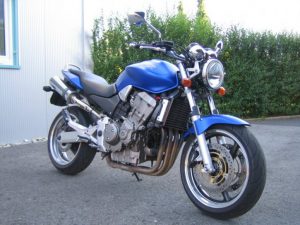 With 14 I got my license to ride my moped from now on legally. I was 16, as my father helped me out to buy me a 50ccm Scooter (Gilera). With the wind in my back it was running almost 60km/h! It was fast enough to disassemble it in a short amount of time by my sporty style of riding. I was practicing the “total tilt” with my scooter and from time to time I did reach my goal. I loved that thing and rode 60’000km with it.

Exactly at my 18th birthday I got my motorcycle license. From now on my means of transportation was my 125ccm Honda City Fly. It only had 11HP, but for the start it was plenty enough. With time I got too bold and did my first highsider. Officially I never got into an accident though and after 2 years my ccm restriction got liftet.

By the age of 21, I passed my apprenticeship as a carpenter and started to serve my military service. The next bike I bought was a Honda Hornet CB 900. At first I was battling with the 110HP. Luckily I always had enough respect and never had a crash with this beast.
With 25, I left Switzerland to work as a carpenter in Bellingham (WA, USA) for 1 1/2 years. I left my motorcycle at home, but I took my downhill bicycle with me. I spent every free minute riding it and almost every weekend I got to ride at the Bikepark in Whistler (Canada). 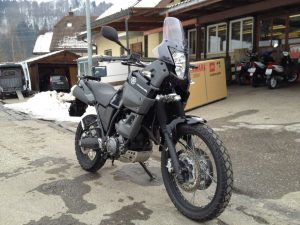 After my return to Switzerland I exchanged my Hornet for a 2008 Yamaha XT660Z Ténéré and my buddy and I did a 6 month motorcycle trip through South America where I met Xenia. Patric and I covered more than 32’000km on our motorbikes. After every crash, I was able to pull my bike out of the ditch and it still would work. From +45° to -14° (degrees celcius), indifferent where or how, “La Guerrera” (the warrioress, that’s how I named her) never let me down.

Back in Switzerland I moved in with Xenia and our first motorcycle trip led us through the Balkans. On this 4’000km I noticed that my Ténéré was using way too much oil. The amount of sand and my improper use of the airfilter took its total. It became clear that after all these kilometers together I had to give “La Guerrera” up. This was very hard for me. I exchanged my “old Ténéré” with the new ABS version XT660 ZA Ténéré built in 2011. Some of the old extra parts I screwed on the new Ténéré and that way there still is a small amount of “La Guerrera” travelling with me today.

The first test for the new bike was “Iceland 2014”. There were only some problems with the battery but back home it was easily solved. With a new battery we got through “Morocco 2015” with no failure at all.

We may request cookies to be set on your device. We use cookies to let us know when you visit our websites, how you interact with us, to enrich your user experience, and to customize your relationship with our website.

Click on the different category headings to find out more. You can also change some of your preferences. Note that blocking some types of cookies may impact your experience on our websites and the services we are able to offer.

These cookies are strictly necessary to provide you with services available through our website and to use some of its features.

Because these cookies are strictly necessary to deliver the website, refuseing them will have impact how our site functions. You always can block or delete cookies by changing your browser settings and force blocking all cookies on this website. But this will always prompt you to accept/refuse cookies when revisiting our site.

We fully respect if you want to refuse cookies but to avoid asking you again and again kindly allow us to store a cookie for that. You are free to opt out any time or opt in for other cookies to get a better experience. If you refuse cookies we will remove all set cookies in our domain.

We provide you with a list of stored cookies on your computer in our domain so you can check what we stored. Due to security reasons we are not able to show or modify cookies from other domains. You can check these in your browser security settings.

These cookies collect information that is used either in aggregate form to help us understand how our website is being used or how effective our marketing campaigns are, or to help us customize our website and application for you in order to enhance your experience.

If you do not want that we track your visit to our site you can disable tracking in your browser here:

We also use different external services like Google Webfonts, Google Maps, and external Video providers. Since these providers may collect personal data like your IP address we allow you to block them here. Please be aware that this might heavily reduce the functionality and appearance of our site. Changes will take effect once you reload the page.

The following cookies are also needed - You can choose if you want to allow them: